Project Objective:  Placement of trench dams made of AquaBlok across and along the pipe trench in order to impede the movement of groundwater along the outside of the pipe and through the trench.

Background:  The property was originally homesteaded in the 1860s as ranch land for hay production and Scottish Highland Cattle. The ranching tradition still continues on the property. This portion of the property has been set aside for the construction of a new housing development. The property is located on the slope of a mountain with some sections of road traversing steep slopes. Per local codes, all of the new sewer lines being installed must have trench dams placed every 200ft divided by the slope. Due to the steep slopes of the property, this requires a large number of trench dams to be placed.

Technical Challenges:  Historically, trench dams made of a variety of material have been recommended and installed with the intention of serving as impermeable barriers that encircle the pipe. However, installation using these materials can be time consuming and technically problematic. Achieving uniform compaction of the soil around the trench dam can be difficult or impossible.  The slope of the pipe directly impacts the frequency of trench dams. The requirement for this project was one trench dam every 200ft divided by the percent of the slope. The housing development was being constructed at approximately 9000ft elevation on the side of a hill causing some sections of the pipe to have a slope steep enough to require trench dams within 20ft from one another. This led to a large number of required trench dams.

AquaBlok Solution:  195 tons (9 truckloads) of AquaBlok 2080FW#8 (PONDSEALTM) were shipped to the project site in 2,700-lb bulk bags to be used in the trench dams. As the material self-seals when hydrated, no mechanical compaction was needed. The contractor chose to fill a small form below the pipe and hydrate material to ensure that there was sufficient product completely surrounding the pipe. Following that, material could simply be gravity dropped around the pipe and into the trench dam form. The AquaBlok trench dams were constructed approximately 48” wide, depending on the trench walls, and 18” thick. Approximately 4-6” of AquaBlok was placed under the pipe and approximately 12” was placed above the pipe.

and material handling; Trench dam form, created to the specification of the project.

Timeline:  The AquaBlok trench dams were constructed in under 20 minutes at the beginning of the project with times decreasing as the project went along. The time consuming aspect of these specific trench dams was the small form for material below the pipe. This was an optional step that was performed in order to give a higher degree of comfort that the material would seal all the way around the pipe. Had material just been gravity dropped around the pipe into the form, then each trench dam would have taken dramatically less time to construct.

Results:  Using AquaBlok, the trench dams have shown no signs of failure. The dams are functioning as designed. 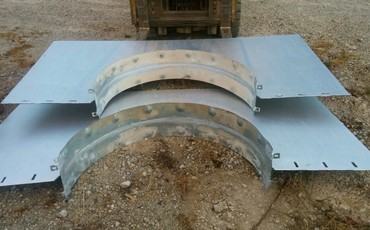